MRR, or Monthly Recurring Revenue, is a very important metric for any SaaS business with subscription-based model, if not the most important. In a recurring revenue model, once we acquire a customer, we expect a recurring stream of money every month, which is the main idea behind MRR.

Yet, why is it that important? In this guide, we will learn why, as we will also learn how to properly calculate MRR, how to calculate MRR growth, and how to utilize it to improve your business performance.

Without further ado, let us first begin by discussing a bit deeper about the definition of MRR.

What Actually is MRR?

Above, we have mentioned that MRR stands for Monthly Recurring Revenue. As the name suggests, MRR is in a nutshell, the amount of revenue you can expect every single month, your predictable revenue stream.

The main purpose of knowing your MRR is to measure the performance of the SaaS business, which can be difficult with conventional method due to the subscription model itself.

As you can see, it can be difficult to measure your predicted revenue due to various variables: a SaaS company might offer various pricing plans, different billing periods, and different contract values.

This is where MRR comes in, which in essence, normalizing the contract revenue to accurately measure your performance, including measuring churn rates and growth rates. MRR provides us with just one consistent number that we can track over time.

Depending on your pricing models, among other factors, there can be many different approaches to calculate MRR. However, at its most basic, calculating MRR is fairly simple:

As you can see, the challenge here is finding the average bill amount of your customers. If you only have 10 clients, probably using this approach can be effective. However, what if you have 10,000 clients with varying contract terms? Obviously calculating the average paid amount can be quite complex.

Another common approach is to use a customer-by-customer calculation. Here, let’s say customer 1 is paying $1,000 a month while customer 2 is paying $500 a month. You can simply sum these two amounts and you will get the MRR of $1,500.

Depending on the size of your business, the number of clients, and variations of pricing models, you can choose between the two different approaches above.

When discussing MRR, we can’t stop with solely calculating the MRR, but we should also consider MRR growth.

Why? Because calculating MRR growth is not as simple as calculating the growth of your customer base. In fact, there are three main aspects we should consider:

So, your MRR growth is the sum of all these three aspects, that can be calculated with this simple formula:

So, if for example your new MRR is $1,000, your additional MRR for the given month is $500, and you get a churn worth $200 that month, your MRR growth for that month is $1,300. Pretty simple, but the key is properly calculating all the three different aspects.

So, How Can We Grow MRR?

Based on the MRR growth calculation above, we can see that growing MRR is—in theory—fairly simple: acquiring more customers, getting existing customers to grow their current plants (and stay with you), and avoiding churn as much as possible.

However, in practice, maintaining a healthy recurring revenue growth can be really frustrating. This is caused by the fact that maintaining all the three aspects together can be really difficult, and sometimes they can contradict each other. For example, you might get new customers by introducing a major overhaul to your software product, but your existing customers don’t like this change—causing churn—. Things like this can be downright frustrating.

Yet, that’s not saying there’s nothing you can do to ensure growth, and here are four main tactics we can implement:

The most surefire way to get more money is obviously to charge a higher price tag. It is a well-known fact that many SaaS companies, especially B2B ones are underpricing their products well below their actual cost.

Most of the time, this is caused by fear: fear that we can’t stay competitive, fear that we’ll be rejected by our customers, and so on. This fact is often the culprit of why maintaining a healthy cash-flow for most SaaS business is so difficult: not only we are selling our product below its proper price, the subscription-based model allows a longer time to recover our costs—because customers pay in fractions monthly—.

So, it is actually very important to assess your pricing according to the value of your product. If you are confident about your software’s quality, for example if it is providing a unique, valuable solution, don’t be afraid to charge a proper price.

The simplest way to do this is to increase your price and check your conversion rate after a month, more often than not—if your product is good—the price increase won’t affect conversion. Keep increasing until you see a decline in conversion or when you don’t see any positive effect on growth.

Back when freemium was the buzzword around half a decade to a decade ago, almost every SaaS businesses are offering the free version of their software, usually with limited features compared to the full, paid version.

This practice is still pretty common today, but most SaaS companies, especially the market leaders are now moving towards the free-trial model, where they are offering the full version of their software for a limited time. There is a reason behind this, as apparently offering a free plan will hurt your business in the long run. Why? Supporting these free users can be really expensive, and unless you can generate a lot of prospects (a whole lot), it’s hard to benefit from this method.

Offering your full product for a limited time is generally the better, more beneficial approach.

What about the unlimited plan? A maximum, unlimited plan generally limits the possibility of expansion: you can’t offer an upsell or cross-sell because they are already getting “everything”, and if they are not, you are delivering false promises.

Instead, set your price based on value, as we will discuss on this next one.

3. Charging based on value

There are several methods where you can set your value-based pricing strategy:

A common way to set SaaS pricing is to charge your price per-user. The benefits of this approach is both ways: your business get unlimited opportunities to make money from a given business, and on the other hand, a customer can spend less depending on their actual needs. In short, versatility.

Here, the more a user used your software, the more you will charge them. Also known as metered pricing, or pay-per-use pricing. For example, Google charge for their Google Suite per gigabyte of usage. This is a good approach if your software is used frequently, or is needed for a long-term basis.

Proper upselling and cross-selling are the main ways to generate more revenue effectively. The common practice here is to sell add-ons, additional features, or complimentary software outside your base plan.

How To Analyze Your Performance Through MRR

As we can see above, MRR is by itself, a pretty simple and straightforward metric. So, how can we use it to track the performance of our SaaS business?

As we have mentioned above, there are three aspects of MRR, which we can expand into five:

To properly address our performance, we should observe all of these five aspects, and let’s use an example to properly illustrate. Let’s say your MRR for this month consists of:

Based on this data, here are the things we can observe:

As you can see, breaking down the MRR by type and measuring them individually can allow us to see the bigger picture. For example, if we know based in this case that we have a problem in Contraction MRR, we know that our higher-priced plans aren’t offering enough value, among other reasons.

In What Case Then, That Our MRR Will Grow?

However, getting your existing customers to upgrade (increasing Expansion MRR) typically require less cost, sometimes even no cost at all. So, the thing you should aim is to get your Expansion MRR higher than Contraction+Churn MRR, a thing we know as negative churn.

Focusing on growing your Expansion MRR is really important if you want to grow your revenue—and thus, profit—. You should especially focus on optimizing the two factors mentioned above: providing excellent product and service, as well as properly communicating your value proposition.

MRR is a very important metric to observe for any SaaS companies. However, we should remember that it is, in the end, just a metric, and it won’t bring any value unless we can properly analyze it and use the data to improve the business.

This is actually a common mistake made by many SaaS companies: measuring MRR as a vanity metric, but not using the data properly. By properly measuring and analyzing MRR, we can make better future predictions, as well as fixing our current mistakes and optimizing our strengths. 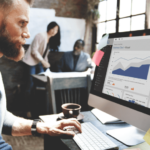 SEO for SaaS: How to grow organic for your SaaS business
August 16, 2019Mike
Everything You Need To Know About Marketing Attribution
August 8, 2019Mike